April 03, 2014
I've just washed my dishes, for no other reason than that they needed doing. There weren't very many, and it didn't take very long. This doesn't seem very remarkable, except that the state of my kitchen sink has long been an analogue for how my life is going. If things are going badly, my dishes don't get done, and everything is messy and horrid. If things are going well, they do get done, and everyone's happy. 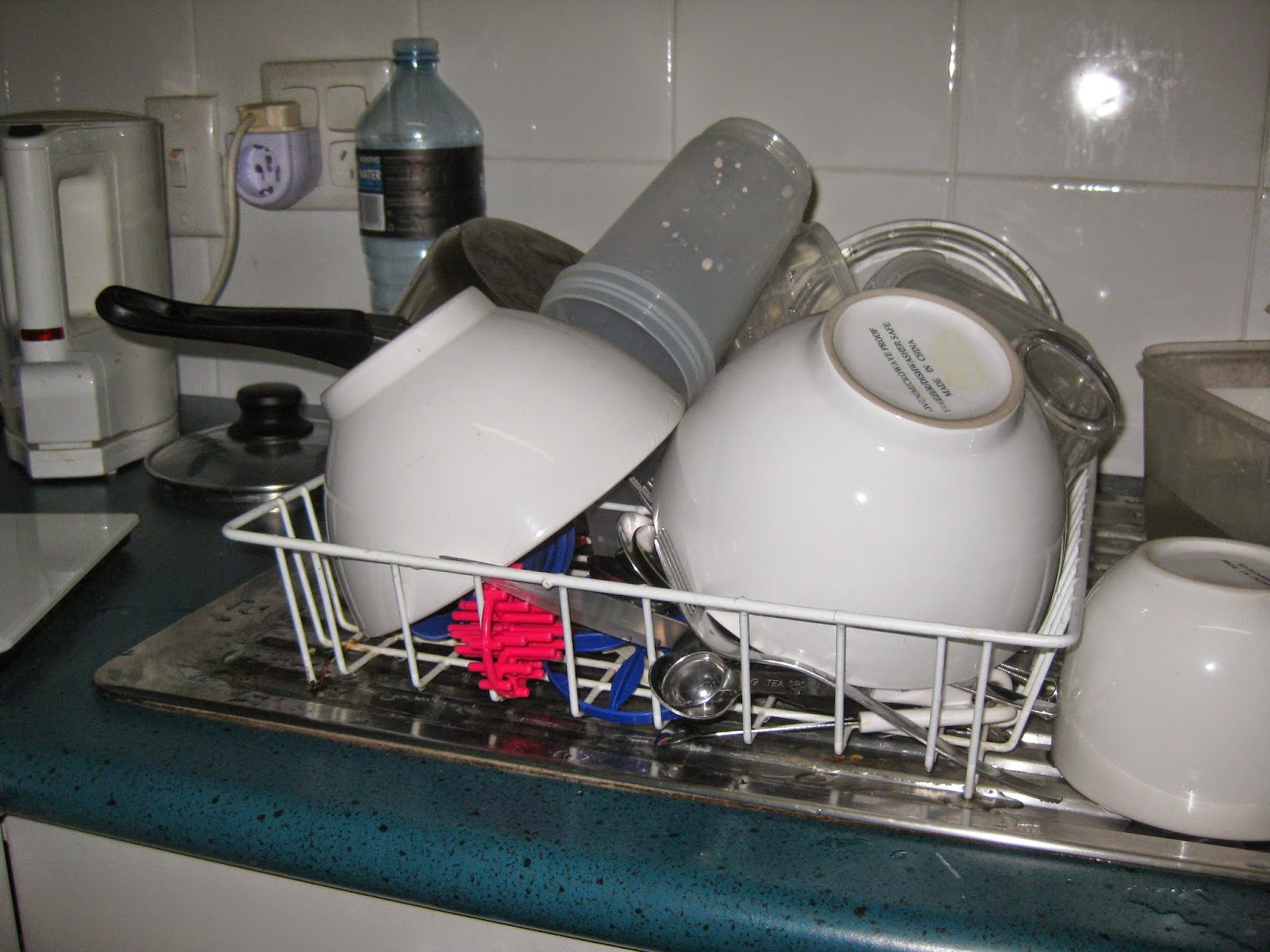 Over the past year it has become more physically challenging to do my dishes (and most things: my wrists and hands are stuffed), and as I would have already expended some of my already limited energy on cooking – hence the dirty dishes – I rarely had the energy to also clean up afterwards. So there would be dirty dishes.

I don't leave my dishes in/around the sink because I just don't care about them, or can't be bothered; when I have limited physical resources, washing dishes becomes a low priority, compared, for instance, to looking after Dexter dog and FreddyCat.

I did try having my “domestic assistance” person do my dishes, but I would invariably find they weren't done properly, and have to do them myself, anyway.

Of course, it's easier to do the dishes when there aren't very many. When my dirty dishes became problematic, I stopped making them dirty. I put away all my cooking things, and ate take outs and snack food instead. Problem solved, sort of.

This was great for my kitchen sink, with only a water glass or so to quickly wash up before anyone came to visit, but very bad for both my budget and my health (and I am working really hard to improve my health). So I compromised and tried to make food that only required a very few dishes, but somehow even the simplest thing made in one saucepan might also use a wooden spoon, knife, chopping board and multiple plastic storage containers, plus the plate/bowl and fork/spoon to eat from. Even a microwave meal has me washing out the plastic container to recycle it, and the fork/spoon.

Unfortunately, FreddyCat creates a lot of washing up. I wash out all of his cat food tins (recycling again; don't ask me to stop recycling), and clean out his bowl(s) every time I have to throw out food he won't eat (very often). Sometimes this is more than I can manage, and it mounts up in the sink.

However, as my general health slowly (oh, so slowly!) improves, I have found more energy for cleaning, which is good news for my dishes. It's still physically challenging, and I am still mindful of using as few dishes as possible in the first place – and nothing heavy – and it seems to be working out alright.

I've recently graduated to boiling pasta (saucepan, colander) and adding sauce from a jar (spoon, and eventually the jar, for recycling), and using a bowl and a fork. Other times I'll have canned soup (mug, spoon) and drink milk (glass (I haven't yet reached the point of drinking straight from the bottle)). If I cut up fruit (chopping board, knife), I'll eat it from the board, not use a bowl.

I know we're not supposed to store canned food in the can once it's been opened, but I will, rather than pour it into a plastic container that will eventually have to be washed up.

I do sometimes use meal replacement shakes in lieu of cooking, but each one of the shakers (I have two) has three parts that need washing (if I'm organised enough to rinse immediately after use, it's manageable; leave it for a few hours and it's horrendous).

Anyway, the point is, I did my dishes, just because they needed doing, and I could do them, not because someone was visiting. I was able to do this because I'm healthier than I have been in a long time, and I'm happy about that.

Popular posts from this blog

Considering that I am constantly fighting with piles of dirty dishes in my little kitchen, you'd think that the first thing I'd want my cleaner to do is wash them. And I used to. But I quickly realised that although the dishes moved from the pile, through the soapy water in the sink and to the drainer, the vast majority of them didn't end up being clean. It turned out to be a great big waste of time - and a huge disappointment - and I had to wash the stupid things myself anyway.

So now I do them myself, eventually. When my cleaner comes, once a fortnight, I'll sit and do my dishes while he or she is doing the housework tasks I find difficult (rather than just annoying). I have also even been known to do a sink full of dishes in between cleaning visits, often in the middle of the night when I can't sleep, or when I have other pressing things to do (procrasticleaning).

So, this is really embarrassing....

On Saturday I went and got new tyres for my wheelchair, having worn them down to the threads. Nothing earth-shattering there, except that I found that having new, round tyres with tread on them meant that I could no longer actually move my wheelchair. This is because I've put on so much weight I now stop the wheels going around, with my big fat thighs. My old tyres were so worn down that I could still move the wheels, but even then one of the wheels would rub on the side of my leg, where the skirt protector is missing.

So I found myself housebound, from being too fat. Horrifying, both from the fatness, and from the housebound-ness. I have been trying to lose weight for a long time, and although I have stopped putting it on, I'm finding it very difficult to lose anything of any significance.

Anyway, in order to not be house-bound, I organised to hire a wheelchair from the Spi…
Post a Comment
Read more

November 21, 2010
I'm considering having some sort of party for my next birthday. It's a significant one, so I ought to do something to mark the occasion - or at least get some presents to cheer me up from turning 30-ten.

I'm hesitating, though, as my last two attempts to have a party got overshadowed by catastrophe, and were cancelled.

I was going to have a 5th (approximately) birthday party for Freddy-cat last January, but the preceding December saw me getting dumped by two friends, and caused me to question my worth as a human being and a friend. I certainly wasn't in the mood for entertaining, even though I'd already downloaded lots of cat-themed music from iTunes.

I was going to have an 8th birthday party for Dexter at the end of October, but just a week beforehand I ended up resigning from a job I loved. I was heartbroken and stressed to my limit, so in no frame of mind for partying. Even for Dexter.